We believe that the power behind us is greater than the task ahead.

Premiere Horizon Alliance Corporation (PHA) is an investment holding company that maximizes corporate value by focusing on projects that invigorate the countryside. Strengthened by a future-looking mindset and a commitment to excellence, Premiere Horizon Alliance continues to expand into industries with a high growth potential. PHA’s vision is to become a major enabler of countryside development anchored on new technologies and best practices.

As the former Premiere Entertainment Philippines, Inc., Premiere Horizon Alliance Corporation became the first public company engaged in the production of motion pictures. In 2008, the Company acquired Digigames, Inc., a corporation engaged in the operation of internet casino stations. In 2011, the Securities and Exchange Commission authorized the Company to expand to mining and real estate industries. In 2014, PHA raised 620 million from the sale of Total Gamezone Extreme Inc. to Leisure and Resorts World Corp (LRWC). Prior to the transaction, Digiwave, transferred all its assets to TGXI.

Premiere Horizon Alliance Corporation’s Vision to become a major enabler of countryside development will be achieved through its Mission of becoming a Value Creation and Execution Company known for its ability to perform with integrity and tenacity, with collective welfare always preceding individual interests. 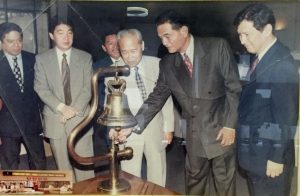 On May 5, 1997, the company was listed at the Philippine Stock Exchange and became the first public company engaged in motion picture production. PHA envisioned a two-pronged thrust: a major presence in the local and international entertainment industry and an initial venture into gaming to round up its total entertainment offer.

On May 16, 2008, the Company’s shareholders and board of directors approved the change in company name to Premiere Entertainment Philippines, Inc., an increase in authorized capital stock, and the acquisition of Digiwave Solutions, Inc., a corporation engaged in the development of gaming software and operation of internet casino stations.

On December 29, 2011, the company’s name was changed to Premiere Horizon Alliance Corporation and added mining, real estate, information technology, and other related businesses to its portfolio. PHA also lowered the par value of its shares from P1.00 to P0.25, decreasing its authorized capital stock from Php 1,800,000,000.00 to Php 563,560,000.00.

In 2012, Premiere Horizon acquired 66.9% of Redstone Construction and Development Corporation (RCDC). RCDC is engaged in the business of providing hauling services for construction works for mining, real estate development, environmental protection, and remediation.